A Typical Day at the Homeschool 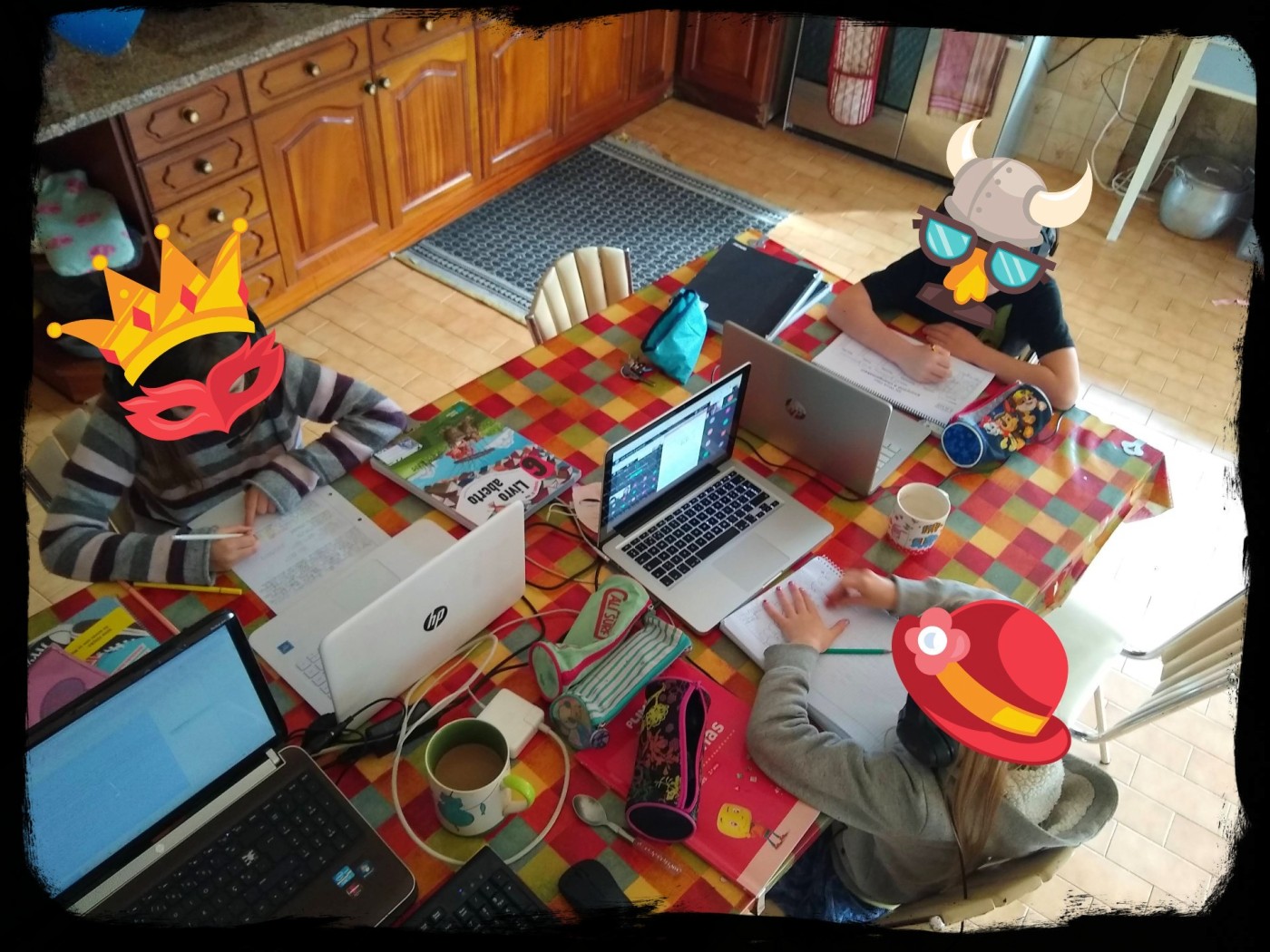 “Teacher.” Pause.”Teacher.”  And at last there must be some kind of answer, because the next thing is “Can I go to the bathroom?”  Permission is received and off goes youngest.  As the bathroom is next to the living room where we are all working and youngest is a door-optional user, I caution oldest child and middlest child to mute their microphones.

Youngest remerges and settles down in her chair, but at this stage the class has moved on and now she is lost.  I lean over and help her find her place and she carries on with what she appears to be doing, which is waiting for the answers to be read out and then slowly and laboriously copying them into her book.  Instead of what I think she should be doing which is working out the answers for herself….

“Daddy, the internet’s not working.”  Oldest is having technical issues and has been dumped out of her Google classroom.  “Well, I can’t do much about that darling.  Try again.”  With all three children in lessons and with my wife teaching at the same time, I’m the only one who doesn’t actually need to be online at the moment.  I’m trying, with an increasing sense of futility, to mark some teacher training assignments that were due back last week.

“Daddy it’s still not working.  It says it can’t find the website.”  This sounds like a step beyond our usual internet crappness.  When the schools got sent home I went out and tried to find a better package than our existing ADSL connection that promised 24mbps and never got much closer to that than 5mbps.  Sometimes 8 or 9 if we were lucky.  We have changed to what is meant to be a 4G connection with speeds up to 40mbps but having spent an hour on the phone to tech support the other weekend, we discovered that our house is apparently the only one in the village that the 4G network doesn’t reach.  Tech support promised to send someone to install an antenna, but we have heard nothing since.

I investigate oldest’s tech issues.  Somehow, she has managed to turn her laptop onto flight mode….  Her lessons resume.

Youngest is beginning to squirm in her chair from boredom and/or lack of activity.  Her microphone is off and as I glance over, I can’t see what, if anything, she is meant to be doing.  She starts singing a song to herself.  This enrages middlest, who is generally critical of people singing, but finds youngest’s singing particularly infuriating.  “STOP IT!” He yells.  “I CAN’T CONCENTRATE!”  I caution him to calm down and try to find out what youngest is meant to be doing now.  “The teacher’s just talking.”  She says.

“What’s she talking about?” I ask.

“Well,” he says, “today’s lesson is about shapes.”

“OK, but what are you meant to be doing now?”

“Oh.” He says brightly, understanding the question at last.  “I don’t know.”

“OK.  Can we go and find your teacher to ask?”  I bring him out of the group lesson (Does Google classroom not have breakout rooms and if not why not?) and we go back into his main lesson.  There is one other student there and no teacher.  We go back to his group lesson.  The group has made a bit of progress in that there are another 15 lines of HAHAHAHAHAHAHA in the chat, but no teacher.  She is presumably off monitoring in other groups.  I realise it is now breaktime and take him back to the main classroom where his teacher has posted a “It’s breaktime – see you in 15 minutes!” image.  He goes off on his break.  Youngest breaks at the same time and they disappear off to play.

“Yes.”  I hear the first word that oldest has uttered in class so far this morning.  That appears to be it though as she lapses back into silence and carries on doing some of the exercises in the coursebook.  I take advantage of the moment to try reading an assignment for the third time.  I manage to get it marked, which makes a rate of one assignment per hour so far.

I’m about to send it when oldest announces “OK.  I’m done.  Can I have a snack?”  Her break runs 15 minute behind the other two, but this is the snack window, so I stop what I’m doing and sort out some biscuits and milk.  I make them take it outside so that they get at least ten minutes of daylight and fresh air this morning.

My phone rings.  It’s the technician from the phone company.  “Can I come and install it now?”

“What?  No.  Of course you can’t!  You were meant to phone us three days ago to set up an appointment, not just show up randomly!”  I interrupt my wife’s class to find out what time she finishes and then tell the technician after lunch please.  That’s not possible.  We agree on Saturday afternoon.

I realise middlest and oldest should be back in class and so call them back in.  Youngest hasn’t finished her rice cakes and she’s not allowed to eat in class, so I show her how to sneakily duck out of sight to snack.  Hashtag Life Skills.  Probably the most important thing she’s learnt this morning…..

Everyone’s back online and in class again, so I sit down and try to get on with my marking.

3 thoughts on “A Typical Day at the Homeschool”