Well.  This one was controversial.  In some respects what Sugata Mitra said in his plenary on Saturday morning doesn’t even matter anymore, such was the debate it sparked and which still continues via facebook and twitter.

Mitra, it is clear, has his devotees and his detractors.  I don’t think I’ve ever seen someone receive a standing ovation in a talk that people actually walked out of half way through.  Do a Twitter Search for Sugata Mitra, and you’ll see what I mean.

So what did he actually say?  Well, if you know anything about him or his work, you’ll find that it actually wasn’t anything new – it was just a restatement of the research he’s done into self-directed online learning.  In a nutshell what he said was:

Kids in crap places don’t get good scores and this is because no-one likes to live in crap places, so the only teachers who stay in crap places are the ones who aren’t good enough to get jobs in good places.  Kids aren’t scared of computers and don’t worry very much about breaking other people’s stuff and if you leave a kid next to a computer for long enough they learn how to do things.  If you give them a challenge, they rise to it.  Therefore, do kids need teachers or can we just give them all computers?

I’m paraphrasing here obviously.  You might also begin to see why this provoked some strong reactions to an audience of educators.

I bumped into Mitra at Harrogate train station while we were both on our way home and I sat down and asked him about it.  This was not a formal interview, but he was nice enough to take the time and talk to me and answer a few questions:

I asked him why people had such extreme reactions to what he was proposing.  He said he thought it was because people saw it as the end of the teacher and that people thought he was saying there was no more need for them, and that they feared this outcome.  So in order to clarify this I asked him what he thought the role of the teacher would be and he said that this was what his research was focusing on now – where do the teachers take these new ideas.  He is experimenting, as he mentioned in the plenary, with a number of schools in the north east of England and some of the teachers are incorporating what he calls SOLES (Self Organised Learning Environment) into their curricular work, while others are using it extra-curricular.  It occurred to me at that point that it was better suited to content classes (e.g. physics / history) than language classes, but he said that language was the first thing to develop, even in native speakers who showed the same incremental increase as non-native speakers.

What I didn’t ask him, and should have done, was how that incremental increase was measured – was it only vocabulary or grammatical resource?  And I got the distinct impression that he sees no need for specialized language instruction.  I repeat that this is my interpretation, but in all his experiments the language development has been largely incidental and where language development was the focus (pronunciation) in one experiment, the kids performed well – but is this perhaps because pronunciation is not a creative aspect of language?  It is largely a question of the mechanics of speech and doesn’t require language, only mimicry.

It also, sounds terribly similar to Prabhu’s “Bangalore Project”, or the Procedural Syllabus, which Prabhu published in his 1987 book “Second Language Pedagogy” and which formed the basis of Task Based Learning.  I put this to Mitra who thought it might have some similarities but that he preferred to think of it a research based learning.

Or as Gavin Dudeney pointed out on facebook – webquests.

Watch it and decide for yourself – here’s the link to Sugata Mitra’s IATEFL Plenary video:  http://iatefl.britishcouncil.org/2014/sessions/2014-04-05/plenary-sugata-mitra 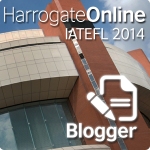 Further Thoughts and reading on this:

The Donald Clark Plan B blog has some fairly harsh criticisms of Mitra’s methodology, research design and on the state of things now: http://donaldclarkplanb.blogspot.co.uk/search?q=Mitra

Wiktor Kostrzewski presents a more balanced view of the positives that both students and teachers can take out of Mitra’s ideas here: http://www.16kinds.com/2014/04/05/1422/

Finally, Graham Stanley has an extensive overview of the debate, and has managed to gather together a lot of differing viewpoints from various social media platforms – you should definitely read his take on it all: http://blog-efl.blogspot.co.uk/2014/04/iatefl-harrogate-online-sugata-mitra.html

When Graham Stanley wrote the piece listed above, he hadn’t actually watched the plenary, he was more collating, analysing and assessing the different viewpoints other people expressed.  He has now watched it and gives us his take on what Sugata Mitra said here: http://blog-efl.blogspot.co.uk/2014/04/iatefl-harrogate-online-sugata-mitra_7.html

Phillip Kerr looks at who’s doing what in Ed Tech and draws some interesting and unsettling links between some of the big players – including Sugata Mitra .  here: http://adaptivelearninginelt.wordpress.com/2014/04/06/edtech-and-neo-liberalism-fragment-of-a-network/

If you know of any others – please post them in the comments section!