How can we focus language teaching more at discourse level rather than sentence level? 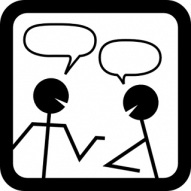 The first #eltchat of 2012 attempted to answer this question!  I wasn’t actually there and didn’t take part in the chat and I’m still not quite sure how I’ve ended up writing the summary except that Marisa_C possesses remarkable powers of persuasion and as someone who teaches higher levels this is an area of interest!  Hopefully, this captures the key points, but I’m not a “discourse specialist”, so feel free to point out any errors or omissions.  I haven’t cited individual contributors, but the transcript is available if you’d like to know who said what.

The initial question makes the assumption that discourse works at a higher level than merely the sentence thought the Wikipedia entry relating discourse analysis to “approaches to analyzing written, spoken . signed language use or any significant semiotic event” – which I interpret broadly as meaning “if something attempts to convey meaning, it can be analysed to see how it does so”.  A more accessible overview of discourse suggests that discourse analysts are concerned with “the construction of meaning throughout a text”.  (it should be pointed out here that the word “text” is used more to mean a linguistic event than a written document).

Thus discourse can apply to patterns of interaction, “text” structures, communication events, language within a text – usually occurring within a context of authentic language use.  There are no set “rules” of discourse per se, because discourse examines everything and the rules change depending on the context.

Stuck at the Sentence?  Problems with discourse:

Receptively, learners simply may not know enough vocabulary to access texts effectively – to fully understand a text learners need to be able to recognize 95% of the vocabulary used in the text (Laufer, 1989).  Additionally, the mechanics of textual cohesion devices like referencing, linking expressions and paragraphing need to be understood.

Receptive knowledge of these devices also form part of language tests, like FCE, CAE, CPE, IELTS (etc), and within fields like EAP.  Often these tests also require learners to demonstrate productive knowledge of these devices in structured, genre specific writing tasks.  While genre is an aspect of discourse, genre familiarity is a separate issue for learners to grapple with.

Where learners are preparing for a language test, classes tend to become very test focused, very accuracy focused and very form focused – developing a test dependency that can be difficult to move away from.  This may account for the amount of language teaching conducted at the sentence level within test preparation classes, though this is not ideal.

It isn’t helped by the general trend within published ELT materials for decontextualized, fragmented, sentence based language presentations.  Grammar teaching in particular tends to be conducted at the level of the sentence and examine items in isolation and without reference to a wider context.  The natural fluidity of language would seem to predicate against this.

Problem?  Solution! – what a bunch of Hoey!

(Bonus points to those who got the discourse analysis joke there….)

The simplest responses to the issue of isolated sentence based grammar teaching would appear to be just to teach grammar in a wider context and by making learners aware of functional aspects of language and their use – aspects of Speech Act study (which is only possible in context).  This could be facilitated by more use of authentic materials or by use of digital coursebooks (this latter point wasn’t fully expanded upon – I’m intrigued and would welcome comments!).

The other key suggestion is to move learners from receptive awareness of discourse patterns, for example making them aware of such patterns as they occur in listening and reading tasks, through to productive acts that feature and practice the target discourse structures.  This would seem to favour a product approach to writing – the exposure of learners to a model text before asking them to produce something based on that model.  There is often a reluctance amongst learners to “do writing” in class, but while instruction could take place in class, the actual practice of the writing skill need not.

(An authorial aside – just from reading through the tweets as they related to discourse and testing, in particular the learners desire just to “get through the test”, I think it’s worth pointing out to learners that often with testing, there is no “quick fix”.  Discourse features occur in many language tests precisely because they are skills to be developed and rather than something that can be sidestepped.  There are task strategies than can help fine tune learner performance, but if the underlying skills aren’t there, neither will exam performance be! )

A good question – do learners really need discourse analysis skills or is it just the teachers who do?  There was a general consensus that the main goal is to have learners working and using “real language”, which would seem to take us back to using authentic materials as part of the input process, both to serve for language development and provision of exponents, but also to raise awareness of discourse structures and patterns as they arise in the target texts.

Teachers therefore need training in discourse analysis so that they can effectively instruct the learners, and be able to evaluate published materials more critically.  Thus they can help the learners to not only look at language performance but also to reflect on the language they encounter, to think about aspects of discourse such as audience and purpose – to be aware of the patterns rather than actually conduct a discourse analysis.

Further Reading, References and links from the chat:

(Links given where possible)

An apology on behalf of #eltchat – Raquel_EFL appeared to make a large contribution to the chat with people responding with phrases like “brilliant” and “Good point!!!”  but unfortunately for some reason these contributions didn’t show up in the transcript and I fear have been lost to history….

6 thoughts on “#ELTChat Summary: Teaching at a Discourse Level”