As mentioned previously, I’m making more of a focus on vocabulary this year, and one of the things I’m going to be working with is the vocabulary box.

Now this is obviously not a new idea and it’s not even a new idea to me, I think the first time I came across this was almost exactly eight years ago in an seminar run by Bronwen Allen at IH Katowice, where she introduced the idea of wordbag cards (which is the term I’m going to use here).

Vocabulary revision and recycling is incredibly important – in “Working with Words” Gairns and Redman say that most (80%) of what we forget is forgotten within 24 hours of initial learning – clearly then it is our duty to help learners move items into long term storage and to recycle constantly.

Gairns and Redman quote Peter Russell’s “The Brain Book” as setting out the following revision schedule in order to maximise retention:

Obviously, as teachers, we aren’t always in a position to conduct all of these reviews with our learners, but we can help them out with the next best thing – the vocabulary box or the wordbag.

Here is an example of a wordbag card, bearing the school logo for a nice bit of additional branding….  To give you an idea of actual size, I have eight cards per piece of A4 paper.

It’s fairly straightforward – I have it down as “the chunk” to try and emphasise that words don’t always exist in isolation.  With higher levels I try to make sure that the things that get written down are indeed chunks, with lower levels I play it by ear.

One of the problems I’ve had in the past is simply starting the wordbag off.  It can be difficult for students to understand the purpose of the wordbag cards and what they are expected to do with them, you can’t always guarantee a steady stream of relevant vocabulary and it might take some time for there to be enough wordbag cards in the wordbag to actually do anything meaningful with!

So what follows is a “lesson” that I came up with this year to try and get things going.  It borrows from an idea expressed in Morgan and Rinvolucri’s classically titled “Vocabulary” – namely that we have relationships with words, we have preferences and associations with them and that making use of these relationships can help the learning process.

three wordbag cards per participant (including the teacher), already chopped up onto separate slips of paper and preferably on different coloured paper, but that’s just because it looks pretty…

Some of your favourite vocabulary games and activities (there are some ideas given below).

On the board draw three separate three box grids, like so (only neater): 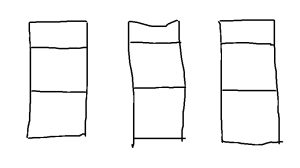 The three words I used the other day were:

I gave the learners two minutes to work out what connected the three items.  The answer of course is that these are three of my favourite words.  They are my favourite difficult word, my favourite useful word and my favourite fun / fantastic  word.

I then asked learners if they knew what any of the words meant – if they came up with a suitable definition or expression of meaning, I put that in the second (middle) section.  But if not, I gave them a contextual sentence and wrote it in the third (bottom) section – e.g. “I ran out of credit so I had to top up my mobile this morning.”

Eventually, you get all of the boxes filled and then I check what goes into each section and label the sections with “the chunk”, “meaning” and “example sentence”.

I then asked all the learners to think of their favourite difficult, useful and fun/fantastic words and note them down.

One problem I’ve had with this stage is duplication of items, particularly if the learners are struggling to think of something suitable and overhear their colleagues coming up with a good idea.  So I’ve done this on a “first come first served” basis, making clear there should be no duplication and writing up the words the learners choose on the board next to their names.

Once everyone (or most of the class) have got their three words, I give out some wordbag cards and the learners fill them in.  For the fast finishers, the answer is simple – just give them another wordbag card and tell them to add another item to the mix!

So by the end of this stage you should have at least three times as many wordbag cards as learners and can then finish off the class by doing a number of different vocabulary based activities with the learners, using their new wordbag cards.

With any luck, by the end of the lesson, the class will understand what a wordbag card is, what should go on it and how it’s going to be used in classes.  They’ll have a basis for ongoing additions to the wordbag, plus a foundation for future revision / recycling activities at the start of end of the class – and it gives the teacher a chance to hit the ground running with the wordbag so that you don’t lose momentum while trying to build up a sufficient stock of cards in the wordbag.