Warmer: Don’t make me say it!

This is a vocabulary revision activity that I used as a warmer with my classes last week – from intermediate to proficiency.

I went back through the previous couple of units of the coursebook and chose 12 items (words, phrasal verbs, fixed expressions, short phrases) that I thought the class would probably know and I divided those items into two sets of six, trying to make sure there was an even balance of “difficulty” between the two lists.

I put these on a handout as follows: 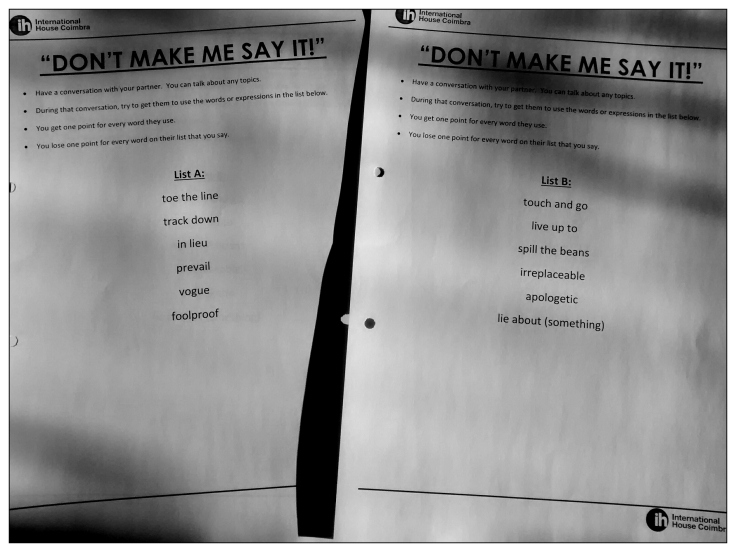 The instructions are as follows:

Predictably, very few of the words on the lists actually got said.  That doesn’t really matter because, as a vocabulary revision activity, what’s happening is the students are creating contexts for the use of the vocabulary, so even if student B doesn’t say student A’s word, they have a pretty good idea of what it is.  However, in hindsight, (and the next time I play this) I’m going to take out the rule about losing a point – it just makes everyone unnecessarily uncooperative.  That said, everyone had a lot of fun.

I also tried this with a group and let them choose their own words from previous units of the book.  This backfired spectacularly as (a) it took far too long, (b) they chose words they didn’t know the meaning of.

It needs a bit of tweaking, but I like this activity because of the way the students are creating these contexts for the items and because it’s prompting them to think about how the items are used – yes, it’s completely artificial, but it also seems to be a lot of fun, which is what you want in a warmer.

Do try it out and let me know how it goes for you – and any changes you made!

(Acknowledgement – I have a vague memory or being shown this or something similar in an input session at IH Katowice about ten years ago, so apologies if this is someone else’s idea!  If so it was probably Richard Venner as it seems like the sort of thing he would do!)