The ever excellent Freakonomics podcast recently put out a podcast called “This Idea Must Die” in which they borrowed a concept from edge.org:  every year Edge.org asks a question and asks its contributors (high level thinkers, scientists, academics and nobel laureates) to write an essay in answer.  This year the question was “What scientific idea is ready for retirement?”

One of the contributors is Sarah Jayne Blakemore, Professor of Cognitive Neuroscience at University College London, and the idea that she suggested should die is that of the Left Brain / Right Brain divide. 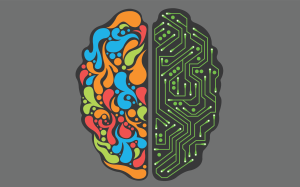 In simple terms, the divide does not exist.  In the podcast Blakemore states that the idea of left and right brain separation arose out of studies done in the sixties and seventies on people who had had surgery to divide their brains.  Snip.  In that scenario, the left and right hemispheres can no longer physically communicate with each other and some brain functions are inevitably degraded as a result.

For everybody else though?  No matter how analytical or creative we are being – we use both sides of our brains.  All the time.

My completely unscientific thought is that it’s probably a bit like arm-wrestling.  If you use you right hand to arm wrestle all the time then the muscles in your right arm develop more.  But this doesn’t mean you never use your left arm at all.  You use it all the time, you just don’t use it as much.  I doubt very much whether there’s much cold logical analysis that doesn’t take place without a little bit of creativity, just as pure creativity without some analysis going on in the background (even if it’s just a case of what looks better in an image – a splash of red here or there?) is unlikely.  If you do more analytical work, you probably get better at doing analytical work – if you spend all your time writing stories or painting pictures, you’ll probably get better at those too.

We shouldn’t however, be labeling people as left brain or right brain and we certainly shouldn’t be targeting our lessons at certain bits of brain.

I thoroughly recommend the Freakonomics podcast to absolutely everybody – brilliant ideas, entertainingly presented and just long enough for a commute into work.

Sarah Jayne Blakemore has also done a brilliant TED Talk on the teenage brain and all its mysteries – if you teach teenagers it helps to explain a lot!!!

There’s a reprint of a New Scientist article ‘Right Brain’ or ‘Left Brain’ – Myth or Reality? which looks at research that in 1996 strongly suggested a left brain / right brain divide based on the idea of either a local focus (detail) or a global focus.  And how further work they did and an attempt to reproduce the original results found completely the opposite effect.

And it’s worth pointing out that if the idea of brain separation is a physiological impossibility and a neurological doubt, then brain gym is still a load of rubbish.

4 thoughts on “Left Brain – Right Brain: This idea must die”